What is a Dentrite: The word dendrite derived from the Greek word “Dendron”, which means the ‘tree’ or the ‘branched such as e tree’. The dendrite is a short arm like protuberance from a neuron. Dendrites work as transmitters and receivers for chemical messages between the cells.

Dendrites used to receives from the nerve cell (neuron) and transfer it to another nerve cell (neuron). The process of transferring information from one nerve cell to another cell is done by using chemical signals and electric impulses, which are electrochemical signals. The information which is transferred from one neuron is often received at the dendrite by the chemical signals, it then transfers to the cell body (soma), and continues across the neuronal axon as an electric impulse. Then, it is finally successfully transferred to the next neuron at the synapse, which is the region or place where two nerve cells (neurons) exchange their information with the help of chemical signals. The ending point of one neuron at the synapse, and it is the beginning of the other dendrites. Dendrites are the branches from the cell body used to send and receive signals from one neuron to the other. The dendrite functions are to receive a signal from the one neuron, process these signals and then transfer to an informational signal to the cell body (soma) of the neuron.

Receive information is the first function of dendrites. The dendrites are such as the branches of the tree because they are used to transfer information. The dendrites extend from the cell body or soma of the neuron and open it in the form of smaller projections. Synapses are lies at the end of these projections, the region where the transfer of takes place. In other words, the synapses are the sites or regions, where two neurons exchange their signals. The pre-synaptic or upstream neurons release neurotransmitters, which lies at the end neurons, known as ‘axonal terminal’. While the post-synaptic or downstream neurons detect the neurotransmitters usually in dendrites.

In the inhibitory neurotransmitters, something similar occurs but binding of the result from the activation of ligand-gated Cl- channels, instead of activating ligand-gated Na+ channels. The Cl- channel flows into the post-synaptic neuron, while K+ will flow out from the cell. Although, the negative charge net influx (Cl-) leads to decrease potential in the cell membrane. Then the cell will be Hyperpolarized.

At the last, dendrites perform the function of transfer information. The summation of various EPSPs can surpass the threshold required for the post-synaptic neuron in order to start an action potential.

The membrane potential of the postsynaptic neuron increases, when an EPSP takes place, for example from -65mV to -64mV which cause becomes the less negative charge. When the summation of various EPSPs makes the neuron membrane potential, it reaches a threshold value of around -55mV. Then, the action potential fired by the neuron which transfers the information to the some or cell body and the across the axon to the end of the post-synaptic neuron. 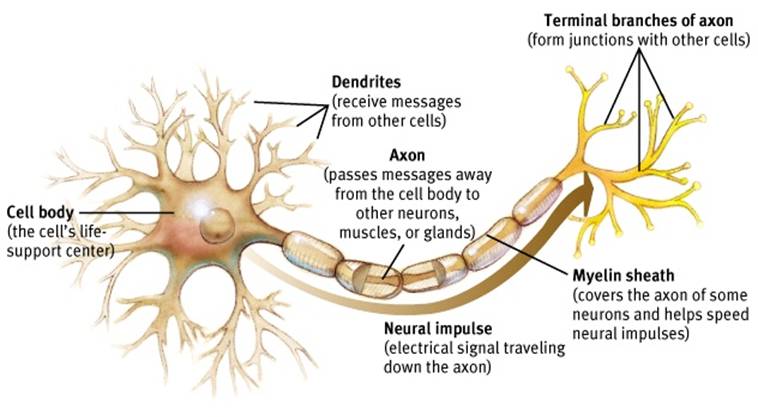 The malfunctions in dendrites associated with a variety of nervous system disorders. Malfunctions of dendrites are varying in type and degree of severity. Its range is from abnormal morphology to the disturbance in dendritic branching. All of the malfunction of dendrites link with the disorders including autism, depression, schizophrenia, anxiety, Alzheimer’s and Down syndrome.