The force which is driving behind the diffusion of fluids is the probability behind Brownian motion simply. All the molecules are having some degree of random movement, erratic, and largely dependent on temperature. The energy of the molecules increases as the temperature increases. 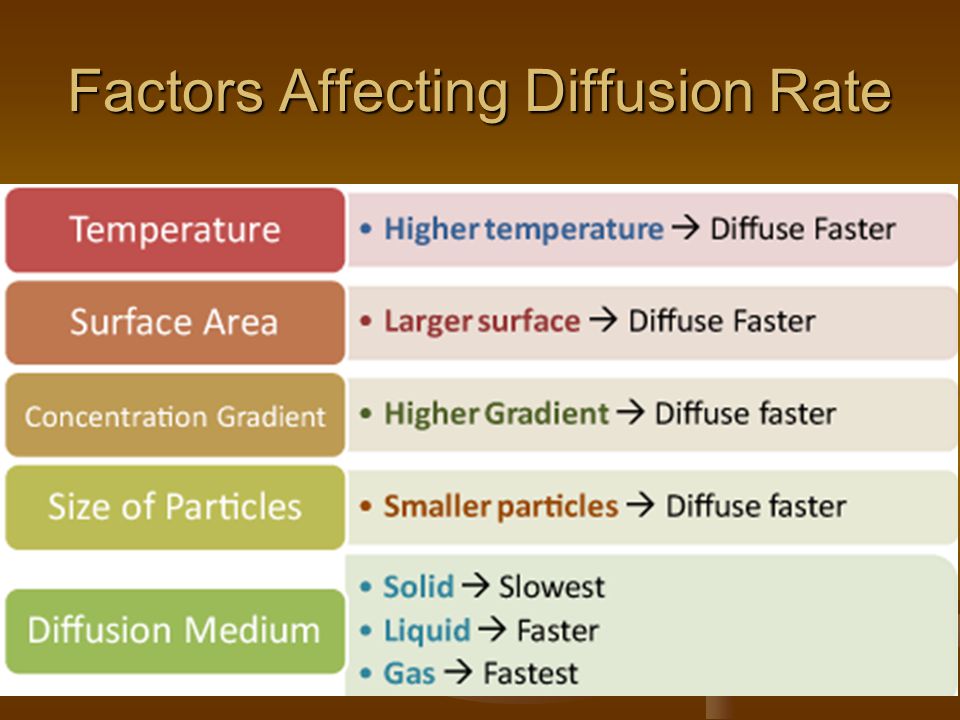 Does facilitated diffusion require energy: Diffusion is the ubiquitous across to the biosphere as it lies in the movement of water and air, and it is necessary driving force global weather patterns. The presence of lipid-based membranes within a living system produces compartments that permit the selective concentration of water-soluble substances.

The ions, proteins, small molecules, and other solutes are having different concentrations across the lipid bilayers. Although, charged or hydrophilic molecules cannot be traverse biological membranes. On the other hand, it is useful in order to maintain the integrity of each compartment, it is also important for molecules to move across the membrane along to their concentration gradient.

A good example of the diffusion of gases is the movement of carbon dioxide and oxygen in actively respiring tissues and cells. These cells require the input of oxygen and glucose, and carbon dioxide requires to be removing from the body and expelled from the body. So, each molecule moves from the high concentration region toward the low concentration region. And there is no direct involvement of ATP or other molecules. They have to cross multiple lipid bilayers from the mitochondrial membrane to the plasma membrane.

The cell membranes are freely permeable to a very limited class of molecules. They have must be small size and non-polar. It permits molecules, such as oxygen, carbon dioxide, and water, to diffuse across the membrane. It precludes every biopolymer practically, most of the nutrients and many small molecules. The transmembrane proteins have two kinds of transferring; one form which acts like carrier and another form channel across the membrane.

Integral membrane proteins are made up of long hydrophobic stretches interspersed with the hydrophilic areas, so the study of these is difficult.

The carrier proteins are involved in the facilitated diffusion having two conformations. The binding of the molecule on one side of the membrane induces a change in the three-dimensional structure of the protein that permits the passage of a molecule by the other side.

The proteins which form channels have minute pores that allow specific molecules to pass through selectively. Many mechanisms used to determine the fit between a molecule and its channel proteins as from the size, to charge, and the ability to interact with amino acid side chains lining the pore. Some proteins channel may express a thousandfold preferences for one molecule over the other biochemically similar substances. Many molecules undergo facilitated diffusion to move between the cells and the subcellular organelles. Some examples are given below:

Ion channels proteins form pores on the lipid bilayer which can be open or closed confirmation depends on the electrical potential of the cell and binding of ligands. These proteins are known as gated channels, in this scene.

In most cells, ion pumps present to ensure that the ionic composition of the extracellular fluids is different from the cytosol.

The binding of neurotransmitters, such as acetylcholine, to the receptors on muscle cells, have to change the permeability of the ligand-gated ion channel. The transmembrane channel is made by multiple subunits which are arranged as closed cylinders. The binding of ligand changes the conformation of hydrophobic side chains which block the central passage. This is a cause of the rapid influx of sodium ions into muscles. The change in electric potential of cell results in the opening of the calcium ion channel, which lead to the contraction of muscle fiber.

Like other transmembrane proteins, aquaporins are not characterized completely. There are many such channels for rapid passage of molecules of water in each cell. These proteins with high concentrations present in bacteria, plants, fungi, and animals. The mutation is proteins from aquaporins which can lead to diseases such as diabetes insipidus.