What is Trophic Level: In an ecosystem, a Trophic Level is a group of organisms that occupies the same level in the food chain. There are main five trophic levels in a food chain in which each is different in the nutritional relationship with the primary energy source. 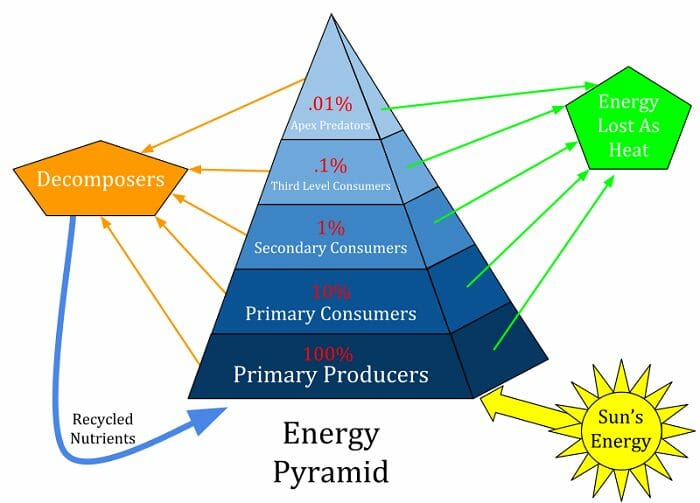 The Detritivores or decomposers are the organisms that consume dead animals and plant material. They convert it into energy and nutrients. Decomposers or detritivores including fungi, bacteria, earthworms, etc. do not fill the independent trophic level, but an important part of ecosystem function.

The organisms in trophic levels of the natural ecosystem do not often create a uniform chain, while many animals may have multiple predators and multiple prey.

Some examples of trophic level are given below:

Primary producers are also known as ‘autotrophs’. These organisms produce biomass from inorganic compounds. In simple words, these are Photosynthesizing organisms that convert energy from the sun radiations and use carbon dioxide and water in the glucose.

Almost all these producers come from the vascular plants including trees, ferns, and flowering plants, in the terrestrial ecosystem. While in the marine ecosystem, the primary productions are algae and seaweed.

There are also many primary producers present in deep-sea which perform oxidization of chemical inorganic compounds instead of the use of photosynthesis, these organisms are known as ‘chemoautotrophs’.

The primary consumers can also consume many other kinds of plant material. Like many birds, bats, and monkeys eat fruits; birds, bats, insects, and arachnids eat nectar; and beetles and termites eat wood.

In the marine ecosystem, the category of primary consumers is zooplankton, and tiny crustaceans that feed off photosynthesizing algae called ‘phytoplankton’.

Secondary consumers are lying on the third trophic stage, which involves the carnivores and omnivores. These organisms gain nutrients from the tissues of herbivores.

The secondary consumers are often small animals, birds and fish like frogs, snakes, and weasels. It also exists in the second trophic level, which involves larger apex predators such as eagles and lion which may consume herbivores.

In the marine ecosystem, secondary consumers are those animals that consume zooplankton. This ranges from the jellyfish to the small fish like sardines and larger crustaceans like lobsters and crabs, and all organisms as the whale that filter feed and basking sharks.

The apex predators lie on the top of the food chain. These are the organisms which have not any natural predators. The apex predators usually have particular adaptions that make them highly efficient hunters like sharp teeth and claws, speed and stealth.

The apex predators perform important functions in the ecosystem as through predation they control the population of lower tropic levels. If apex predators are removed from the ecosystem, the organism including grazing herbivores can over-populated. While if there are fewer plant resources available, the organism which depends on plants will suffer and in turn, may affect the trophic level in an ecosystem. This disturbance in an ecosystem is known as ‘top-down trophic cascade’. It may be lead to ecosystem collapse.