What is Chemiosmosis: It is the movement of ions by diffusion across aĀsemi-permeableĀmembrane (the membrane inside the mitochondria). Molecule ions with net electric charge as Na+, Cl-, it generates energy H+. Ions move down an electrochemical gradient in it. It is the type of diffusion, in which ions move across a membrane from high concentration are too low concentration. Ions also move to balance the electric charge across a membrane. 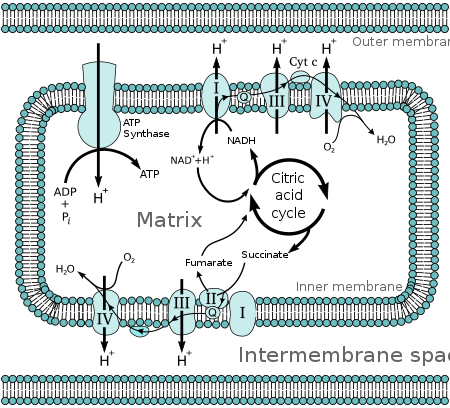 The function of Chemiosmosis:

It works for the production of ATP (adenosine triphosphate). In eukaryotes, ATP produced by the process of cellular respiration. First, the molecules NADH and FADH2 obtained by the citric acid cycle, which passes electron down to electron transport chain which causes of release energy. This energy permits protons (H+) to travel down to a proton gradient via chemiosmosis. In return, it gives the energy to enzymes for the production of ATP synthesis. The flow of protons gradients turn the rotor and stalk to the ATP synthesis that made it possible for phosphate group to attach with ADP (adenosine diphosphate) forming ATP. ATP production called Oxidative Phosphorylation. In aerobic respiration, 38 molecules of ATP formed per glucose molecule. The chemiosmosis performs the function of the production of ATP. Without chemiosmosis, organisms cannot produce energy by own.

The similar properties of ATP production are just coincidence; both chloroplasts and mitochondria are thought to have evolved from free-living bacteria, called Endosymbiotic theory.

This theory explains the symbiotic relationship between other cells; aids them by producing energy in return for a place to live inside cells. So, it is used where the production of ATP takes place in mitochondria, chloroplast, or bacterium.

How does chemiosmoss occur in photosynthesis?

Chemiosmosis is that the movement of ions across a tissue layer, down their electrochemical gradient.

An example of this might be the generation of ATP (ATP) by the movement of H ions across a membrane throughout respiration or photosynthesis.

Peter Mitchell postulated the Chemiosmotic hypothesis. It explains the mechanism of adenosine triphosphate synthesis inside chloroplast throughout photosynthesis. Throughout the photochemical phase or photochemical reaction, ATP and NADP are generated. These are the key elements and employed in the dark reaction for the assembly of a final product of photosynthesis i.e. Sugar molecules.

According to the chemiosmotic hypothesis, adenosine triphosphate production is that the results of proton gradient developed across the membrane of thylakoids.

The proton gradient developed across the membrane is that the propulsion of ATP synthase.

In plants, throughout the light reaction photosystems facilitate chlorophyll to soak up the light. As a result, hydrolysis (splitting of water) takes place and releases electrons and protons. The electrons get excited to higher energy and are transported by an electron transport system. Whereas protons (hydrogen ions) from stroma starts to accumulate within the membrane. This creates a proton gradient. Some protons are utilized by photosystem I to reduce NAHP+ to NADPH. Once the proton gradient is collapsed it releases energy and protons are distributed back to stroma via F0, the transmembrane channel of ATP synthase. This discharged energy causes changes in FŁ1 configuration and triggers the ATP synthase to convert ADP to ATP.