In other words, a complete genome develops by the genes of both parents. Our cells carry a total of 46 chromosomes that get from parents. Each parent gives the same 23 chromosomes to their offspring. Each homologous chromosome can give a different version of the gene. More variety created by two different versions of the gene including the lower detrimental effects of negative mutation and stabilizes a population. In humans, the diploid organism carries two copies of the genome. Homologous Chromosome is having two copies of each chromosome, which helps in increasing both the variety and stability of species. Homologous chromosomes can carry a different version of genes known as alleles.

Human cells produce typically two versions of each protein of DNA. The combination of good and bad allele affects phenotype. Some alleles have a dominant/recessive relationship, in this process, only the dominant gene shows its effects. Some other complex combination relationships produce by different combinations of alleles, which produce different effects on the individual.

During the formation of gametes, homologous chromosomes take part in a process called Homologous Recombination. This process is also known as Crossing Over because when they come close to each other parts of chromosomes exchanged. The homologous chromosomes have the same genes as in length and size too. Theses sections can easily transfer between chromosomes. In the recombination process, two of the chromatids exchange genetic material. This process is important for the creation of variety within a population. Homologous recombination assures that traits mixed together from both parents. 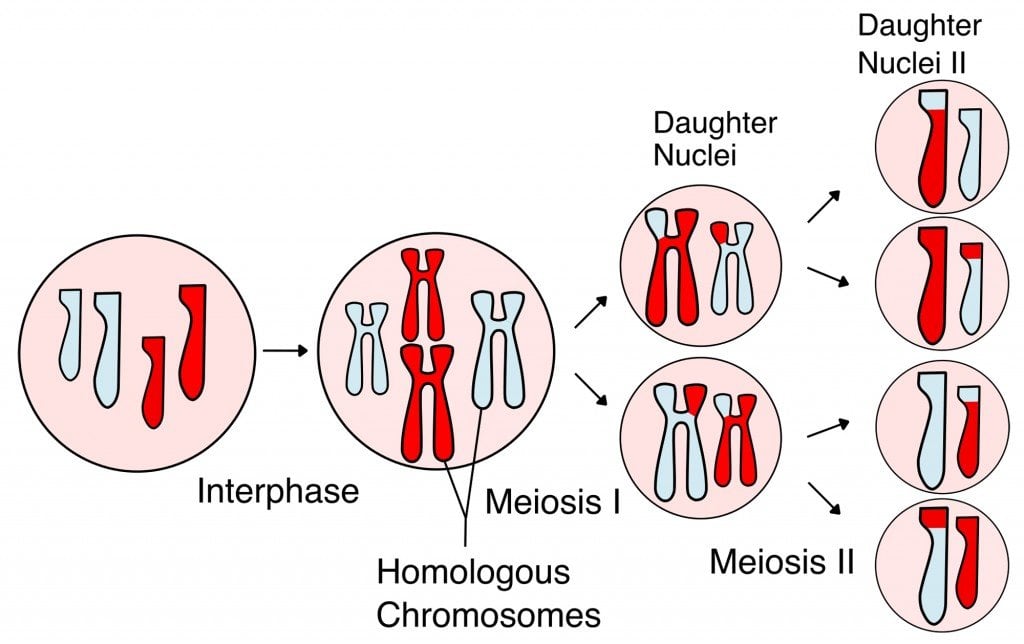 In a simple organism, the chromosome has only one pair of diploid organisms. This is homologous chromosomes because they have the same allele of genes. They can also carry different alleles of each gene. An organism can produce asexually by simply duplication of DNA and cell division. In this case, an organism may remain haploid. Meiosis produces haploid cells, which may be combined with gametes from another individual. Haploid organisms have just one copy of DNA molecule, as they do not have homologous chromosomes. When gametes of haploid organisms join together, they will again in the same cell with a new pair of homologous.

Humans have homologous chromosomes from one copy on a gene from each parent. Half pair comes from mother, and half comes from father. These chromosomes carried in haploid gametes, as sperms and eggs. When a sperm joins with an egg, the fertilizer occurs and the formation of the diploid organism takes place as the zygote. This zygote will divide many times to produce all cells of the body. Each cell in the human body contains 23 pairs of homologous chromosomes, in short, a total of 46 chromosomes. As humans become sexually mature, the body begins to create and release gametes. These gametes reduce to haploid cells, mixed up and recombined in different arrangements. It means that the child will have a mixture of traits not necessary which are in parents or grandparents.