Glycolysis is a process in which glucose divided into two pyruvate molecules. However, it is assumed as a linear pathway of ten enzyme meditation steps. This pathway has two stages or phases; the energy investment phase and the energy generation phase. In it, the first five steps out of ten are Energy Investment Phase or ‘preparatory phase’ that generates glyceraldehyde 3-phosphate. The last five steps of it are Energy Generation Phase or ‘payoff phase’ that generates the final two molecules product of pyruvate.

It is the breakdown of the glucose with the help of enzymes, releasing energy and pyruvic acid. It is the first step for the breakdown of glucose in order to extract energy for cellular metabolism. The process consists of two-phase; an energy-requiring phase followed by en energy-releasing phase.

It is a linear metabolism pathway, it means that it evolved long ago, and it lies in the great majority of individuals live in the present age. It is the first stage of the process which performs cellular respiration in an organism. Many anaerobic organisms, which have not to use oxygen to perform their functions, also used this linear metabolism pathway, because it does not need oxygen.

Where does Glycolysis occur

Where does Glycolysis take place: The glycolysis takes place in the Cytoplasm and can be gain in the absence of oxygen. For glycolysis, the source of glucose comes from dietary disaccharides and monosaccharides in the body.

It performs the function of breakdown of glucose in order to release energy for cellular metabolism. It has ten steps. In these steps, the first five steps are Energy requiring phase, and the next five steps are the Energy releasing phase. It occurs in the “cytosol” of the cell. The own enzymes of it to catalyze every reaction. The most important enzyme which helps to regulate the process of glycolysis is Phosphofructokinase that works to catalyze the formation of the unstable, two-phosphate sugar molecule, fructose-1, and 6-bisphosphate. The phosphofructokinase enzyme help to speed up or slow down this process in order to meet the energy requirements for the cell. 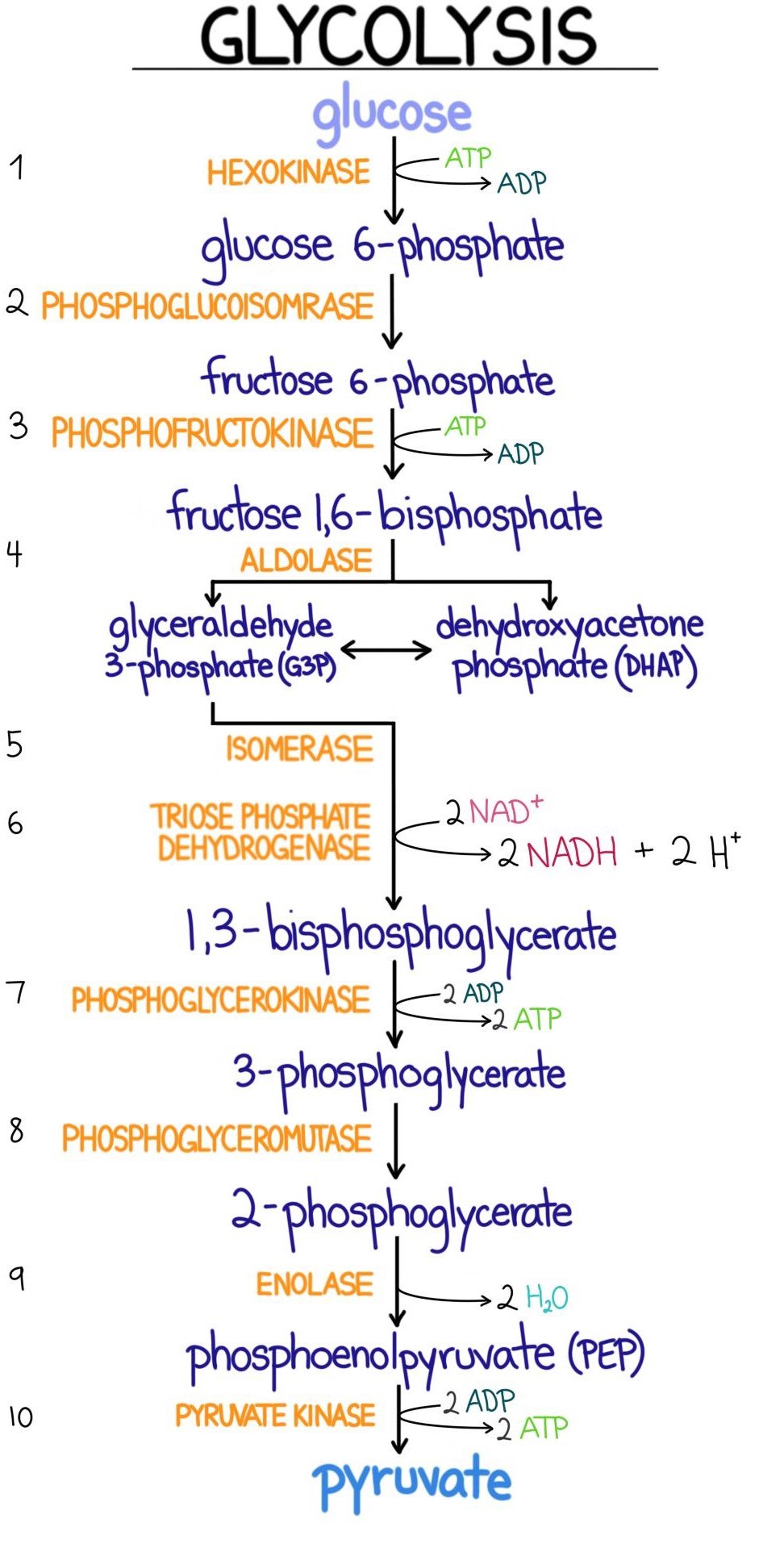 It has ten steps to perform its function. It can be broken down into two main phases; the energy required phase, and the energy-releasing phase.

The first five steps of it are the Energy-requiring phase. In this phase, the starting glucose molecules rearranged and attached to two phosphate groups. These phosphates come from ATP molecules. Two ATPs are used to create an unstable sugar with two phosphate groups, which split for the formation of three-carbon molecules, which are isomers to each other.

Each step of the energy-requiring phase is catalyzed by its own particular enzyme.

In the first step of it, a phosphate group transfers from ATP to glucose, as makes glucose-6-phosphate. This glucose is more reactive than the simple one, and the addition of phosphate traps glucose inside the cell.

In this step, fructose-1, and 6-bisphosphate is produced. This is catalyzed by the phosphofructokinase named enzyme that regulates to speed up or slow down the pathway.

In this step, fructose-1, and 1-bisphosphate split down in three-carbon sugars; dihydroxyacetone phosphate (DHAP) and glyceraldehyde-3-phosphate.

In the last step of the energy-requiring phase, DHAP splits into glyceraldehyde-3-phosphate.

The last five steps of it are the energy-releasing phase. In this phase, the three-carbon sugars go through a series of additional transformation, turning into pyruvate. Four ATP molecules produce along with two NADH molecules in this process.

In the first step of the energy-releasing phase, Glyceraldehyde-3-phosphate, which formed in the initial phase, is oxidized and NAD+ reduces to NADH and H+. This reaction is exergonic and releases energy, which is used by phosphorylating to form 1, 3-bisphosphoglycerate.

In this, 2-phosphoglycerate loses a water molecule and become phosphoenolpyruvate (PEP). The PEP is an unstable molecule.

The different enzymes used in the Glycolysis works as kinases, mutases, and dehydrogenases, cleaving enzymes, isomerases or amylase. Some of the enzymes, which used in glycolysis enzymes, are given below:

After these ten reactions, the net reaction of glycolysis is:

These products occur from glucose in the result of these ten reactions.

What happens to Pyruvate and NADH during Glycolysis?

In the end, two ATP, two NADH, and two Pyruvates molecules are left. If oxygen present, the pyruvate may break down all the way to carbon dioxide in cellular respiration, to make any ATP molecule.

Cells have a certain number of NAD+ molecules that cycle back and forth between NAD+ oxidized and reduce to NADH state. It requires NAD+ to accept electrons. When oxygen presents, NADH can pass the electron transport chain, to regenerate NAD+ for use in glycolysis. While in the absence of oxygen, cells can use other simpler pathways in order to regenerate NAD+. In these pathways, NADH donates its electron to an acceptor molecule in a reaction that does not make ATP but can regenerate NAD+ for glycolysis to continue. This process is known as Fermentation.â€™