The bystander effect is also known as bystander apathy. It is a term of psychology which determines the tendency of the people in order to take action in an emergency or immediate situation when there are other persons present in the scene. This act is highly studied in the sociology field.

In 1964, on 13 March, 28 years old Kitty Genovese was returning to her apartment in the Queens neighborhood of New York City, suddenly Winston Moseley attacked her. This man raped and murdered Genovese outside her apartment and 38 people were looking at this scene but did nothing. Someone called the police, but police dismiss the call as ‘domestic dispute’. While the national media raise the story and public outrage to the onlooker mounted.

In 1969, after the five years of murder, the social psychologists John Darley and Bibb Latane published ‘Bystander Apathy’ in America Scientist. They both conduct four separate experiments in the emergency response. The result of these experiments determined that the social factors which influence the three different emergency management decisions. The Bystander Effect lies in a place in social psychology to explain the cumulative effect of social tendencies during the occurrence of emergency situations. The ‘bystander effect’ considered incorrect, since it determined during the experiments which conducted to genuine concern, although they do not act.

There are various causes of the Bystander Effect in the field of psychology. They are ranged from the thinking someone else in charge, it is not understanding the gravity of the situation because the other people do not take the action.

However, the Emergency First Responders have to train to ignore the feeling and emotion and offer for help when they see an emergency situation. In 1969, John Darley and Bibb Latane coin the fact of Bystander Effect which determines the effect of specific social pressure on the people in the situation of an emergency act. The Bystander Effect is the study of sociology because it is usually an effect of ‘herd mentality’ or ‘groupthink’. 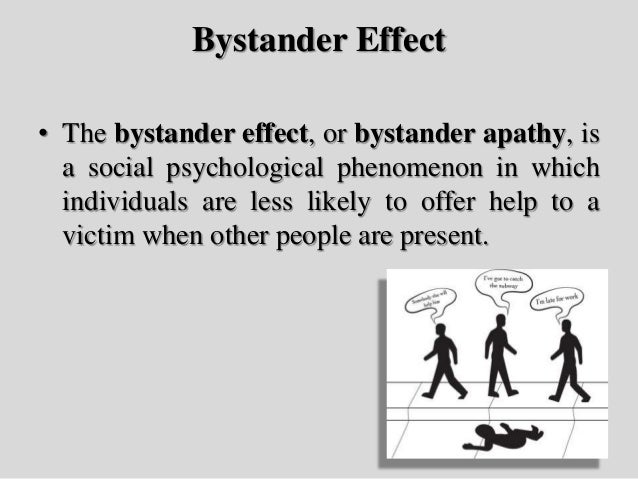 The Bystander Effect is the act of a person in sudden or emergency situations. In the situation of an emergency act, the person has to make a decision firstly, which determines this situation whether or not an emergency exists actually. When the person is alone this emergency situation is the basis of past experience and training. When a person sees the inaction of other people, this act develops the pluralistic response which causes a group to fail or delay to take an action.

The third decision of a person which makes to determine the appropriate course of action is the component of emergency response and the struggle of a person with situational factors that inhibit them from acting. Moreover, the persons with briefly met the victim are more likely to respond.