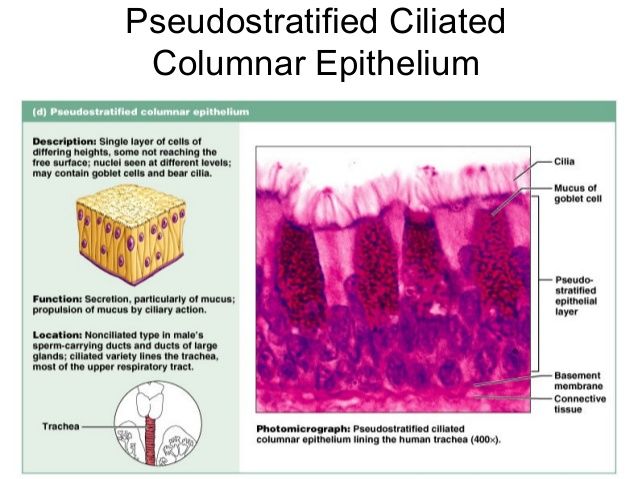 Ciliated pseudostratified columnar epithelium: The pseudostratified columnar epithelia can be classified as a ciliated or non-ciliated, which is based on cellular organelle involving motility and the sensory activity. Every eukaryotic cell has a single primary cilium which plays a crucial role in the development of signal pathways, involving maintaining tissue homeostasis. In the presence of primary cilium, most cells usually known as ‘non-ciliated’ indifference from cells consist of numerous Motile cilia. The non-ciliated tissues consist of tuft like cytoplasmic projection, known as stiffer and composed of actin microfilaments.

Many tissues are composed of goblet-shaped cells that secrete mucus and the longer columnar cells which traverse the entire epithelium. These tissues also consist of basal cells whose apical surfaces cannot be reached at the lumen. The basal cells can be precursors of columnar cells or goblet cells.

The primary function of respiratory passage is the bringing of air in the close contact within blood flow in the capillaries to allow the exchanging of gases at alveoli. The capillaries and alveoli are composed of squamous epithelial cells to maximize gas diffusion.

The presence of pseudostratified epithelium in the upper respiratory tract secures the lungs from irritants. The goblet cells secrete mucus in order to trap particles and preventing them from travel down the respiratory passage. The coordinated action of cilia on the longer columnar cells face the lumen is moving the muscle along with the specific matter away from the lungs. And smaller particles removed as part of normal drainage of the nose, and larger or heavier load sneezed or coughed out.

The pseudostratified columnar epithelia are also seen in vas deferens and the epidermis of the male reproductive system tract. In the organs, cells consist of stereocilia which behaves such as microvilli of the digestive tract. When the sperms exit testes and then enter the epidermis. They are non-motile and it needs to propel by the large quantities of fluid. The stereocilia high the surface area of epithelial cells lining this tubular structure allowing the sperms to concentrate by absorbing excess fluids before the ejaculation occurrence.