Protein Definition: Proteins are basically biomolecules that high molecular weight polymers, polymers unruffled of ? Amino acids.  ?-Amino acids are joined to one another by Peptide linkage.  Peptide Linkage is represented as (-CO-NH-). Proteins are the most important elements of all living organisms. Proteins comprised of Carbon (C), Hydrogen (H), Nitrogen (N), Oxygen (O) and Sulphur (S). Proteins Functions are described below :

Proteins are the Macromolecules which play an integral role in the proper tackling of cells. Proteins built up of the linear polymers of amino acids. Proteins play an operational or mechanical role in Cell Cytoskeleton.

Proteins are the Macromolecules which are Basically polymers of Amino Acids. Protein structures vary in size and structures due to the presence of several thousand to tens of amino acids. The biochemist has classified Proteins Structures into four Sub Levels: You May Also Like: Functions of Lipids | Definition | Classification | Examples

Amino Terminal is at the left side of the Polypeptide Chain at which the free ?-amino group is present.

Carboxylic-Terminal is at the Right side of the Polypeptide Chain at which free ?- carboxyl group is present.

In these structures, Polypeptide Chain is coiled together forming ?-Helix and ?-Pleated sheets.

In the ?-Helix adjacent to the Amino Acids, there are Hydrogen bonded Nitrogen’s and Oxygen’s are present. Proline, Glycine, and Asparagine in the ?-Helix are known as Helix Breakers.

Tertiary protein Structures are basically Three-Dimensional Arrangement of secondary structure polypeptide chains. Disulfide bonds are present between Amino Acids. Which help in the stabilization of its structure. These structures are basically the arrangement of Proteins Subunits that consist of more than one Polypeptide Chains. Simple Protein is those proteins which on Hydrolysis produce only ?-Amino Acids. For Example Albumin Protein, Globulin Protein etc.

Conjugated Protein is those Proteins in which Simple Proteins, as well as Non-Protein Parts, are combined together by Peptide linkage are called as Prosthetic Groups or Conjugated Proteins. For Example Nucleo Protein, Phosphoprotein, etc.

Conjugated Proteins are further subdivided into: These are the proteins end to end with nucleic acids. For Example Histones and Protamines.

These are the protein comprising phosphoric acid in them. For Example Casein of milk.

They comprise Porphyrins as per the prosthetic group. For Example Hemoglobin and Myoglobin.

They conjugated with lipids. For Example Chylomicrons

Eight main Proteins functions are given below: 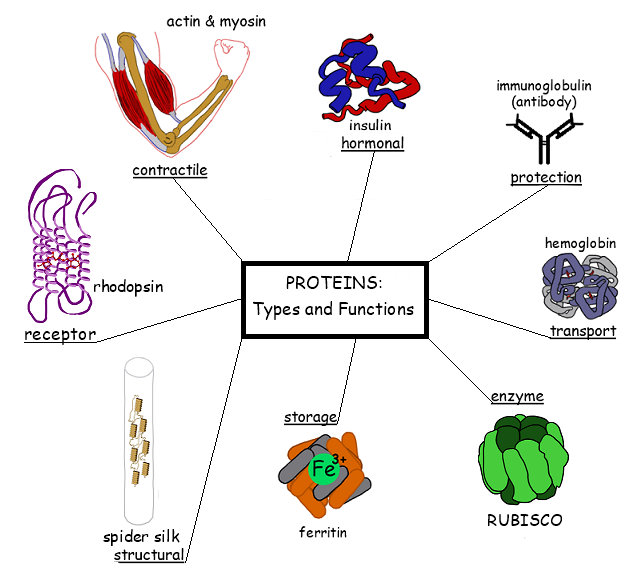 Proteins functions are given below:

These are the following examples of Proteins: