What is an Embryo: It is an early stage for the development of offspring before hatching from the egg. It is an early development stage of eukaryotic individuals which follow an egg of female and the sperm of male as in sexual reproduction.

As the difference of species, the inherent type also may differ. The embryos of many vertebrate species have the same processes during embryogenesis. Most of the difference occurs at the later stage of the development of offspring. 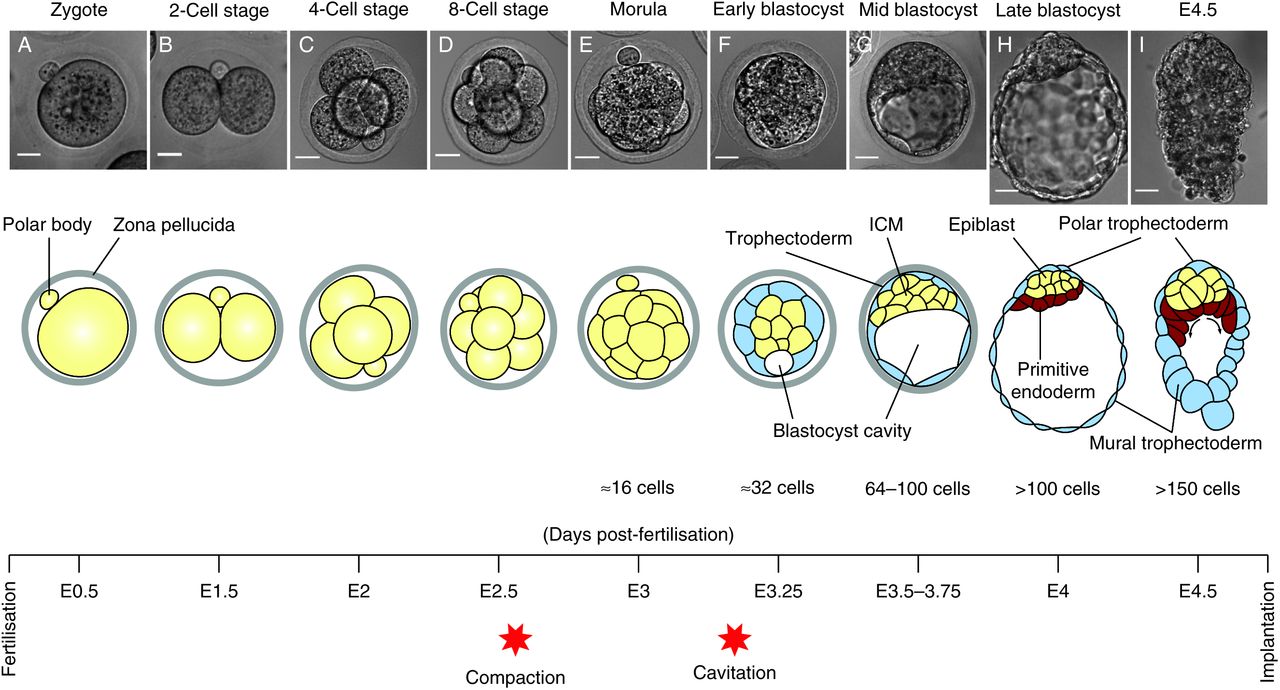 In mammals, embryogenesis has distinct stages, which are described below:

In cleavage, by the following fertilization, the zygote starts to divide in the result of mitosis in manner. In the zygote, there is a lack of growth, and in the resulting cluster of cells remains the same in the size by the initial fertilized cell. When four rounds of cleavage completed, the cluster of 16-celled is referring to the Morula. The cells composed the morula from the outer layer which is called trophoblast and an inner cell of cluster refer to as inner cell mass that will help in the formation of the embryo. Then the empty space between trophoblast and the inner cells filled with fluid. The formation of two cells connects at one pole, refer as the embryonic pole.

When seven rounds of cleavage completed, the cluster cells composed of 128 cells, which is known as the blastula. The blastula is built by a circular layer of cells refer to the blastoderm surrounded by an inner cell mass refer as the blastocyst. Two groups of cells filled by fluid cavity residing refer to blastocoel. During the blastula stage, the trophoblast divides into an outer layer called the syncytiotrophoblast, and inner layer as cytotrophoblast. Both layers cannot produce embryo but help for the placenta. The center of inner cell mass is a flat layer, refer as endoderm. The endoderm creates the yolk sac that supplies nutrients and a source of blood supply to the growing embryo until the placenta formation. The amniotic cavity forms between the remaining cells, the bottom made by prismatic cells are known as ectoderm and built a structure called the embryonic disk. The embryonic disks start conformation change and produce a form with the yolk sac. The third cell layer situated between the endoderm and ectoderm. These layers refer to germ layers. In this stage, the implementation of the embryo into the uterine wall also occurs.

When three germ layers create, it moves toward the center of blastula, and the embryo is known as Gastrula. These three different layers are known as Gastrulation. Gastrulation occurs during the third week of pregnancy, and the process starts with the formation of thick structure across with midline of the embryonic disk refer as Primitive streak. The primitive streak explains the major axes of embryo. At the cranial end of the embryonic disk, the primitive streak expands the primitive node and starts to extend across the midline to the caudal end and produce primitive groove. At this point, the cell outer layer starts to fold inward and detach across the primitive streak by a process refer as invagination. Inside the embryo, the internalized join cells form definitive ectoderm. The cell groups reside between the ectoderm and endoderm create definitive mesoderm.

When the various germ layers created, each starts to show a difference in tissues and organs in the embryo development called organogenesis. The ectoderm shows a difference in the neural tube that forms the central nervous system, neural crest from the peripheral nervous system, and epidermis form skin, inner ear, eyes, hair, and mouth. The ectoderm also creates facial cartilage, sebaceous glands, tooth dentin, and melanocytes. The mesoderm built in the result of the formation of kidneys, gonads, muscles, red blood cells, bones, and the circulatory system. The endoderm forms the lungs, thyroid, bladder, and pancreas. The first development organ is heart, which occurs after gastrulation, starts just after three weeks of pregnancy. The various organogenesis processes and cellular differences continue until 11 weeks of pregnancy. After this, the embryo became a fetus. 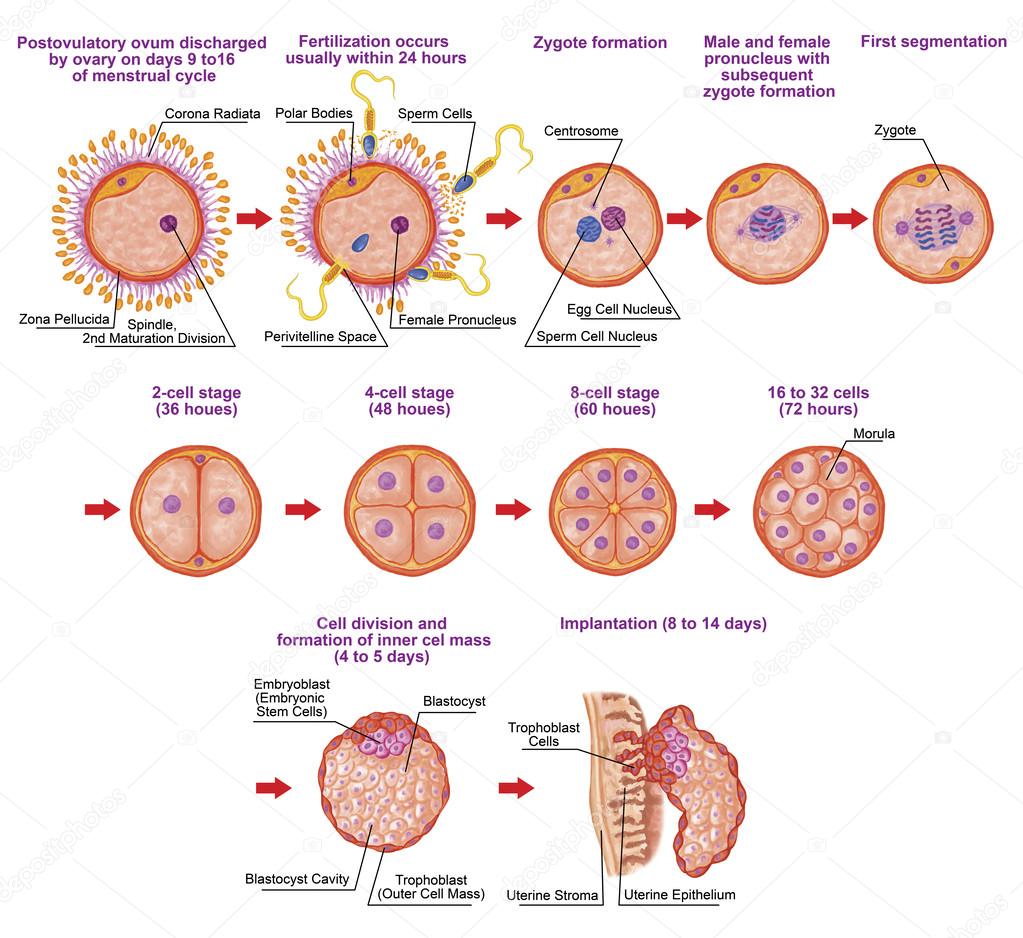 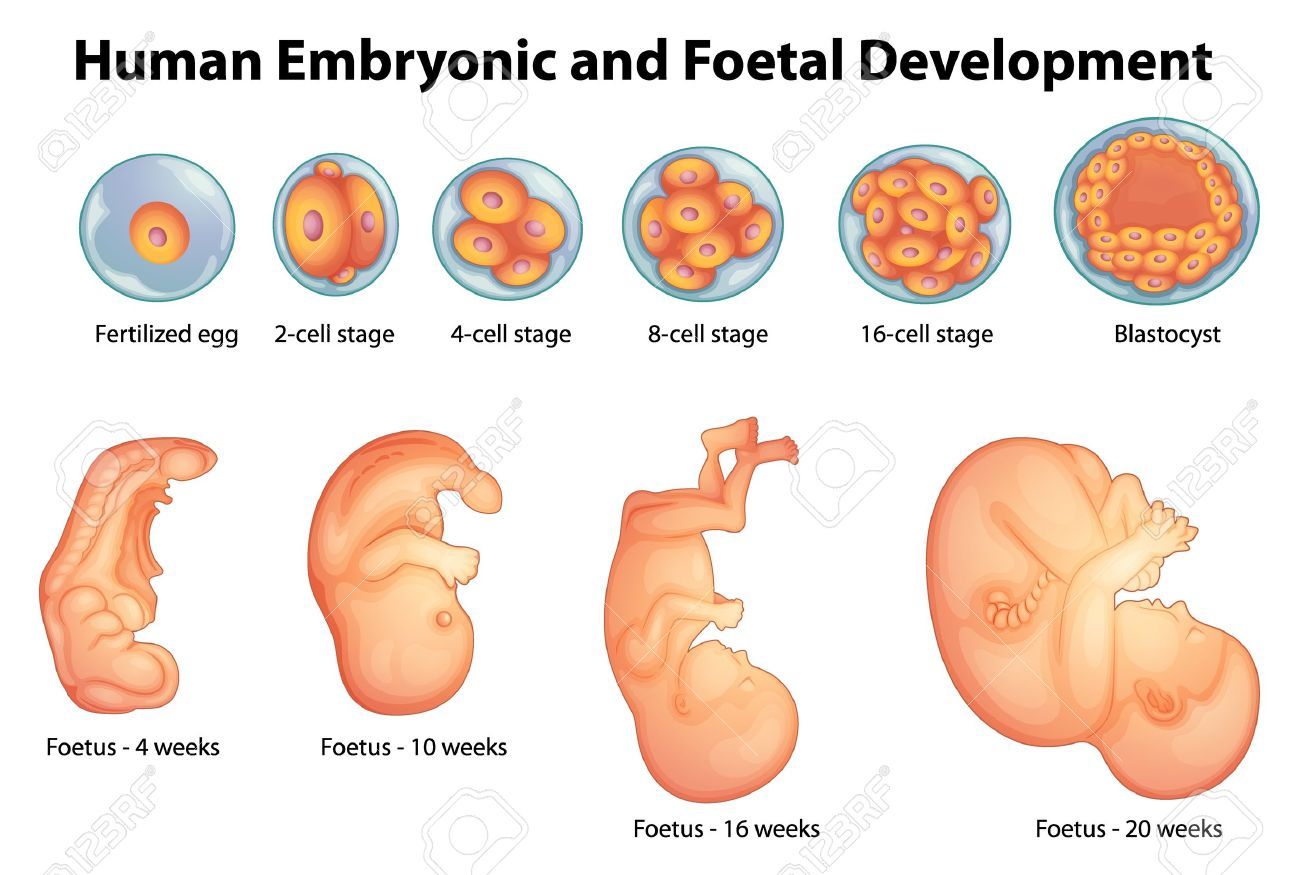 When couples undergo in vitro fertilization (IVF), typically there are fertilized eggs (embryos) that stay and are frozen for later use. Once couples decide that their family is complete however still have embryos remaining, there are many choices. They will donate them to a couple who is unable to conceive. Couples will donate the embryos to research. Or they can thaw them and allow them to die. A fourth possibility is to stay them frozen and continue to pay storage fees, however, this is often not a decision!

Like animals, plant embryogenesis also occurs in the result of sexual reproduction by the fertilization of the Ovule via pollination. As a result, endosperm accompanies diploid zygote, which produces seed together. The endosperm contains dense nutrients that supply the embryo growth. After cell division, a small apical cell, that uses in the formation of the embryo, and a larger basal cell supplies nutrients to the embryo by the formation of the endosperm. At the stage of eight-cell, the embryo starts to flatten and form the axis of structure that is form the shoot meristem, cotyledons, roots, hypocotyl, and root meristem. In plants, germination causes the end of the embryonic stage, when the plant starts to grow out of the seed. At this point, the plant referred to a plantling. The particular processes for plant embryogenesis depend on the species of plants differently.