Adaptive Radiation is the process by which a single ancestral species gives rise to multiple descendant species (or “radiates”) exhibiting different forms and occupying distinct ecological niches. It is a term used in evolutionary biology and refers to patterns of biodiversity and morphological, or anatomical, diversity originating in ancestral populations over geologic time. The classic example of adaptive radiation is finches (family Fringillidae) on the Galapagos Islands.

Charles Darwin remarked upon the diversity of finches on this single island chain, where closely related species often shared common ancestors. His attention was drawn to this during his five-year voyage on HMS Beagle (1831–1836) when he noticed each island supported its species of finches with slightly different features.

One ancient model was based on assortative mating by bird species in the same habitat; this was later replaced by competitive speciation.

A second model was based on the developmental biology of embryonic birds in the same habitat; this was later replaced by Lauriston Taylor’s model based on genetic drift, emigration-immigration, and environmental effects.

A third model was proposed by Peter Grant and Rosemary Grant, and they focus on genetics, natural selection, island ecology, and evolution. The Grants observed that when a selective pressure applied to one generation of birds—in this case, an introduced parasite that attacked only one species of finch—the descendants developed patterns of diversity matching to that environment, but when free from strong natural selection, they produced other morphologies not previously seen in their “source population.”

The concept has been applied in describing patterns observed in plant morphology space (geographic radiation) or behavioral ecology (e.g., sympathy, dis-assortative mating systems). Patterns of adaptive radiation found in nature serve as empirical evidence for the theory of natural selection and evolution.

Two primary models have explained the dynamics of adaptation:

In the assortative mating model, also known as the “parental sorting” or “divergent selection” model, individuals would mate primarily (or entirely) with members of their morphological type, creating a pattern of sympatric speciation. The hybrid offspring of these matings would be less fit than purebred members of anyone’s parental form, and therefore they would be weeded out by natural selection; in this way, adaptation and speciation can occur without geographic isolation.

Given enough time and enough generations where selection is acting on the hybrids with slightly different features from either parent species, these descendants may evolve into two new species where each occupies its own ecological, morphological, and reproductive space.

The ecological speciation model assumes that in small habitats (e.g., islands) in more significant regions (mainland), competition in the primary habitat leads to character displacement and reproductive isolation. This is known as ecological character displacement or niche differentiation, where over time, two separate species occupying different niches will diverge enough to where they could be classified as distinct species.

What is an example of Adaptive Radiation?

An example is Darwin’s finches, an experiment begun by his ship’s captain FitzRoy, who was interested in finding out whether species on islands had common ancestors or were created independently as a form of special creationism.

A workable but not yet thoroughly tested adaptive radiation model is Peter and Rosemary Grant. While the Grants’ 1981 book “was a landmark in the study of speciation, everything they wrote on species formation remains questionable until additional research can test it.

Adaptive radiation differs from other forms of diversification such as niche, resource, or range expansion into unoccupied space (allopatric) or ecological opportunity (sympatric) because the traditional form had to exist in some equilibrium with its environment, which cannot change too fast for the organism to adjust to it. A classic example of this scenario is island biogeography. There are always many more individuals than needed to maintain the population on islands lacking predators. Island species fill up all the niches and compete for space.

Predators, by contrast, typically become rarer on islands (the “island rule”) because there are fewer prey species; this helps minimize competition between the remaining predators. The morphospace occupation of the island is thus more limited than that of the mainland, where so many species are packed together in much less space under harsher conditions. Therefore, on islands, adaptive radiation is studied in terms of competitive interactions among related species competing for similar resources in much smaller populations than one encounters when looking at organisms in terrestrial environments. 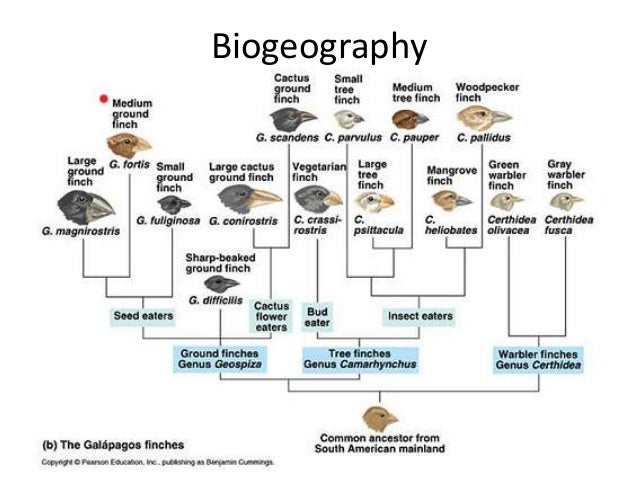