What is Active transport: It is a functional movement of ions, nutrients, or other solutes across a semi-permeable membrane against the natural flow of diffusion. It is defined as a process when a cell uses energy to move molecules against its concentration gradient. It can occur because the cell contains an ion pump that actively transports ions from one side of the membrane to another by using ATP as an energy source.

There are different active transport: carrier-mediated, primarily active, and secondary active. We can define it as the process in which cells move molecules against their concentration gradient by using energy to pump them through membrane proteins. It is also known as facilitated diffusion or secondary active transport because it requires an input of metabolic energy for movement from a low solute potential environment across a biological membrane to a high solute potential environment. There are different types, all involving the expenditure of metabolic energy:

Symport is a type where the transported substance and an ion share the same carrier protein. The symport transports both substances in the same direction.

Antiport is also a type of secondary active transport that requires more than just energy from ATP hydrolysis for the movement against a concentration gradient; it involves transportation across the cell membrane but in the opposite direction.

Endocytosis is a type of transport that occurs during phagocytosis, pinocytosis, and receptor-mediated endocytosis. In this process, the cell membrane engulfs molecules from outside to bring them inside of cells for various reasons, such as nutrient uptake or waste disposal. This process is called endocytosis.

Exocytosis is a type of transport that brings molecules from inside the cell membrane to outside for various reasons, such as nutrient uptake or waste disposal. This process is also known as exogenous secretory pathways, and it occurs at the plasma membrane, where vesicles fuse with their target membranes. 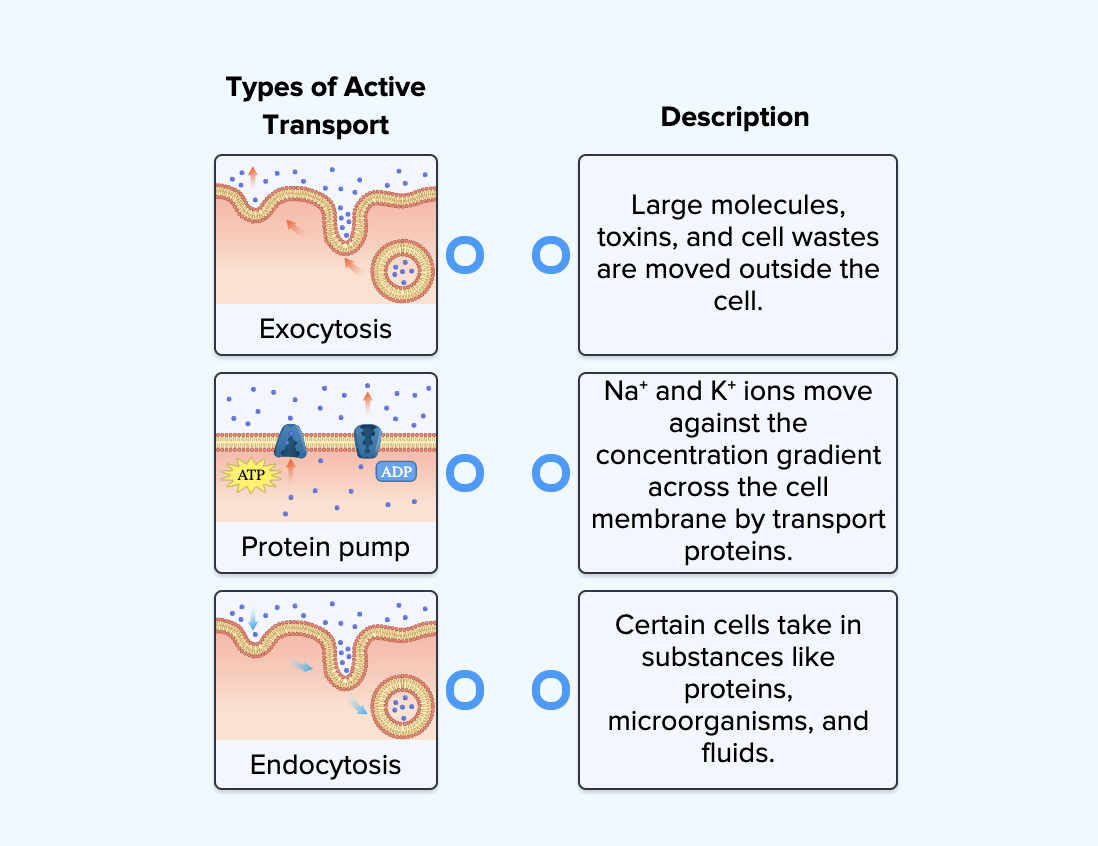 It is the process where molecules move against the concentration gradient. It requires energy obtained by converting chemical energy into kinetic or mechanical work, such as ATP synthesis and electron transfer.

Transport proteins use in this transport to carry out their processes, including moving nutrients, ions, and other substances across biological membranes (cell walls) from one side of a membrane to another or within the same cell.

In addition, pathogens also used this transport, such as bacteria and viruses, to enter cells. The viruses attach to the cell membrane and inject their contents into the host cells, while bacteria have various methods of transferring through the cell walls or membranes to invade a particular host’s organ(s).

Sodium-Potassium Pump (Na++/K+) is the transport type in which sodium cation (positively charged ion) passes through the plasma membrane to the outside of the cell, and potassium cations are passed simultaneously inside the cell.