Dihybrid cross between two distinct genes or alleles which are different in two observed traits is known as Dihybrid Cross. It is an experiment in the genetic term, which shows the phenotypes of the two different genes followed by the mating of organisms having multiple alleles at those gene loci. Mostly, in sexual reproducing individuals having two copies of each gene, one from father and other from mother, permit them to carry two different alleles. Actually, the name ‘Dihybrid Cross’ comes from the historical process in which the future generations observed when two ‘pure lines’ crossed. Thus, the individuals having parts of two distinct true-breeding lines determined as a ‘Dihybrid’.

Nowadays, hybrid defined as the organisms which have true-breeding for a particular gene as Homozygotes. This homozygote determined that how the same alleles used to create the zygote. While the Heterozygous organisms used two different alleles to produce the zygote. So, it defined that the Dihybrid cross is the mating of two organisms, in which both are heterozygous for two different genes are observed. 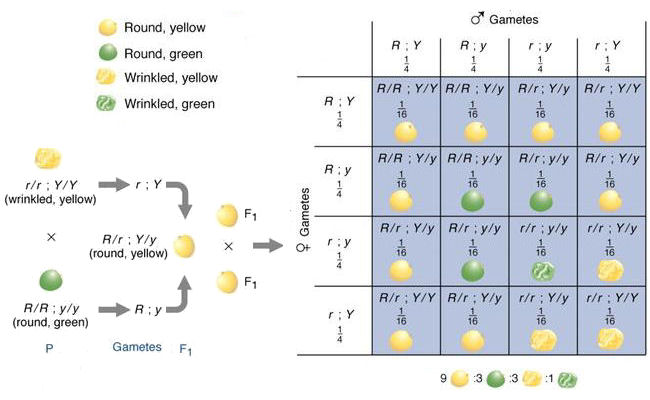 How to Complete a Dihybrid Cross:

The dihybrid cross can be completed by using the following steps:

Always make a pair of an allele from the same gene and always write capital first, as AaBb, not ABab.

Use the FOIL method or the claw method for the identification of all possible combinations.

Just include the different gamete combinations for the each parent, as AaBB has two combinations of AB and aB.

The phenotypic ratio reflects the mathematical probabilities only and may not be necessary to reflect the actual offspring ratio. 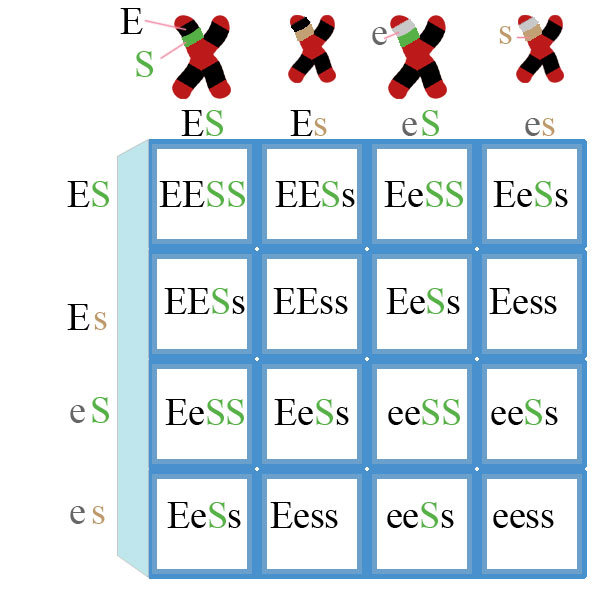 The following examples express how dihybrid crosses can use different modes of inheritance.

Complete dominance occurs when two a trait between two different alleles shows the result in which the offspring carry the properties of one allele and the properties of another allele completely masked. According to Mendel’s experiment, the classic model of the dihybrid cross expressed clearly. So, the experiment of Mendel’s peas defined this example more clearly.

According to Mendel’s experiment, a trait occurs between the two pea plants having different alleles. A trait lies between pod color and the pod shape of peas. The pods can be green or yellow in color that referred to as the ‘R’ gene. The ‘R’ allele of genetic is dominant allele, and in this result, the pod will be green in any of plant were it present. On the other hand, the ‘r’ allele of genetic is recessive, and in the case of genotype ‘rr’ the result will be as yellow pods in the plant.

There are also two different alleles present for the gene in order to determine pod shape. These two alleles determined as ‘Y’ and ‘y’. The ‘Y’ allele of the gene is the dominant allele, which in result cause of wrinkled pods. On the other hand, the ‘y’ allele in genetic is recessive allele, and in the case of ‘yy’ genotype, the result will be smooth shaped pods.

From the top of this chart, all gametes create by the mother. Both alleles of father and the mother are Dihybrid, as ‘RrYy’. It is mean that after the performance of the process of Gametogenesis, the result will be the production of the same gametes. In this case, the two diploid cells form when they enter in meiosis phase. From these two diploid cells, the eight combinations create. In one diploid cell, the organism alleles are segregated into their gametes after the replication during the phase of meiosis I and then separated during the phase of meiosis II. This same thing acted by the other diploid cell with the additional rearrangement of the genes of the parents. It is called ‘independent assortment’ and also can be accounted for the variety created by sexual reproduction. After the end up of this process, as the result, four different kinds of gametes produced. They are as; ‘ry’, ‘RY’, ‘rY’, and ‘Ry’ as shown on the top and right side of the chart. The ‘Punnett Square’ complete as the offspring produce and dihybrid cross used.

By the counting of different types of offspring, there are only a few types occur. There is 1 smooth yellow plant, 3 wrinkled yellow plants, 3 smooth green plants, and 9 wrinkled green plants. The phenotypic ratio expected from the dihybrid cross is 9:3:3:1 when both traits express complete dominance and independent to each other. 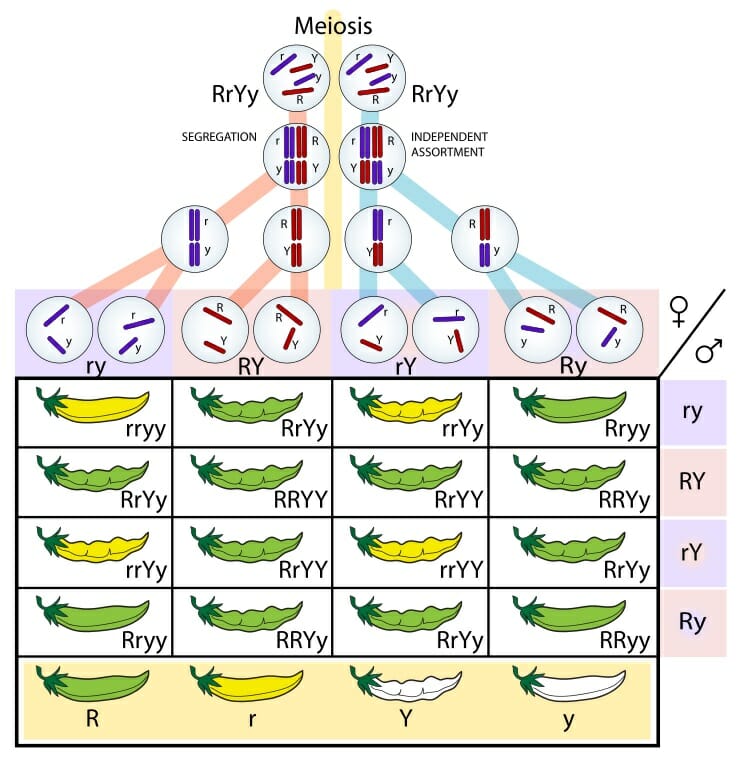 The dihybrid cross does not always have the phenotypic ratio 9:3:3:1 same. In the case of different modes of inheritance, the resultant ratio will be different. There is another method “tree method” for a dihybrid cross to define this example.

In the tree method of a dihybrid cross, the genotypic ratio of every different gamete is multiplied by the second gene in order to get the same result. It displays vertically instead of in the square.

If these all alleles represent the same alleles, it became easy to count genotype belongs to which phenotype and ratio will fine easily as 9:3:3:1. But all times, not all genes show complete dominance. Maybe instead of round or wrinkled, the pea plant can produce an intermediate variety genotype as ‘Yy’. This phenomenon called ‘incomplete dominance’ and it changes the phenotypic ratio. Because of the ‘Yy’ now the new phenotype as ‘half-wrinkled’. So now the new phenotypic ration will be counted. 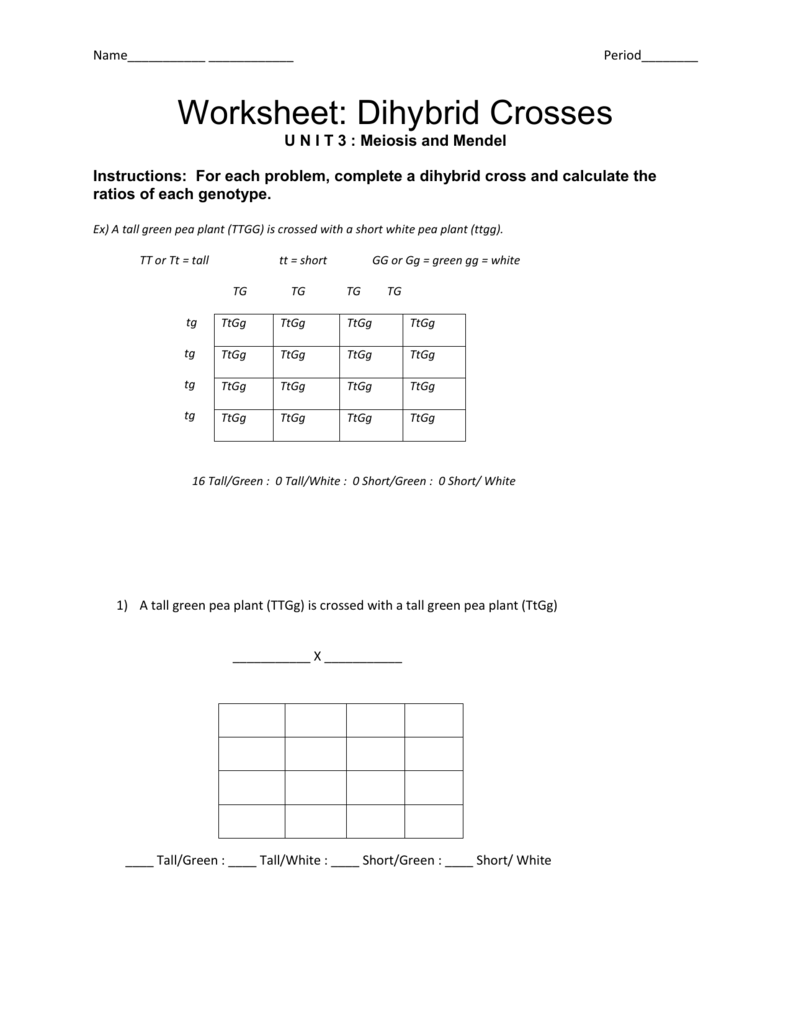